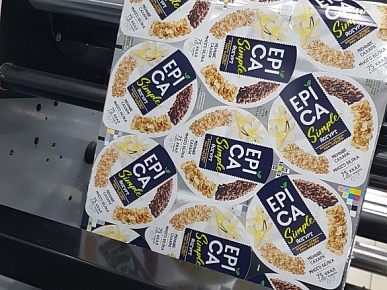 EPICA Simple appeared at shops about a month ago and the first batch of sealing lids had been cut out for the consumer in October. We’ve already produced several editions of smooth die cut lids for new Ehrmann products. The company is one of our biggest consumers, it was among the first companies to make clear choice for the usage of die cut lids without embossing. Therefore, all the EPICA spoonable yogurts are covered with a smooth die cut lid, which makes the top milk brand products look glossy.